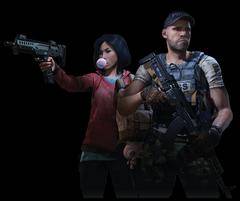 Humanity is on the brink of extinction. From New York to Moscow, through Jerusalem, Tokyo and Marseille, the undead apocalypse continues to spread. As the end looms, a hardened few band together to defeat the horde and outlive the dead. World War Z is a heart-pounding coop third-person shooter for up to 4 players featuring swarms of hundreds of zombies. Based on the Paramount Pictures film, World War Z focuses on fast-paced gameplay while exploring new storylines from around the world. This GOTY Edition contains the multi-million seller game World War Z and all paid and free DLCs released: • Marseille Episode with 3 new PvE missions located in France • Many explosive game modes in PvP/PvE including the deadly Horde Mode Z • All character Skin Packs (The Professionals, War Heroes) • All weapon Skin and Variant packs (Last Aid, Special Operations, Biohazard, Lobo) • And one more upcoming weapon pack Note: If you own the standard edition of World War Z, you can upgrade to the GOTY Edition.

Available on platforms:Epic Games Game
Deal Status:Expired
Get It Free

Instructions to get the game for free World War Z :

A Planet of Mine

Steel Series
Get It Free

YOU ARE BEING FOLLOWED

Playstation
Get It Free